Our experts will reply you very soon.

* Mentioned prices may vary depending upon date of travel, hotel availability, surge pricing and seasonal rush.

2 Night in Leh
1 Night in Nubra
2 Nights in Leh
Meals :- Breakfasts & Dinners as mentioned in the itinerary above
Local sightseeing in Leh
Excursion to Pangong Lake
All transfers & local sightseeing by private non AC vehicleSpecial Offer
1st 50 people get BELLA TOURS bagAirfare & Taxes
Any increase in Govt. taxes, Fuel price and any applicability of new taxes from the govt.
Any up gradation in hotel room category
Any meals other than specified above
Any sightseeing other than mentioned above
Any Entrance fees or Fees for video or camera permit
Any item of personal nature like tips, laundry, telephone calls etc
Service tax will be applicable on total invoice18-0731-12 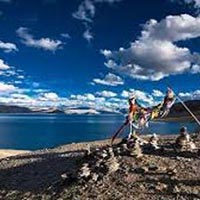 Upon arrival in Leh, welcome by our local representative and transfer to Hotel. Rest of the day you require to take a complete rest for acclimatization to the arid high altitude of Leh (3505 m) in the evening will enjoy the sunset point (Shanti stupa). Overnight stay in Leh.
Meals : Dinner
Day 2:

Leave for Leh sightseeing. MAGNETIC HILL= which defies the law of gravity. It has been noticed that when a vehicle is parked on neutral gear on this metallic road the vehicle slides up & further Driving through a picturesque landscape.
SANGAM = 4 km before Nimmu village, The Confluence of Two river Zanskar and Indus is called Sangam. The National high way is passing on the cliff so you can see the confluence and both river starches coming out from the colorful mountain George.
Gurdwara Patthar Sahib: Situated 25 miles from Leh, It is believed that once Guru Nanak ji was meditating demon attack by threw large stone on the Guru Nanak ji. The boulder melt while touching the Guru ji .In the shape of Guru Nanak ji the demon tried to crush Guru Nanak by kicking the boulder with all his might.
Spituk Gompa : 8-9 Kms from Leh, From the Monastery one can see the Indus valley and on other side Airport and leh town .Many icons of Buddha and fine Thankas are to be found in this 15th century old Gompa.
Ladakh Hall of Fame: The Hall of Fame is a glorious War cum historic museum build by the Army. It is worth a visit for every citizen. Kargil War strategies and other key strategic battles fought in Ladakh. Here’s something that you will be proud of our defense personnel who sacrificed themselves so that we could live in peace.
Leh Palace: Is built by King Sengge Namgail of Namgail Dynasty in 17th century. The Palace is nine story high, and it overlook the main Market, Stok Kangri. The upper story was earlier used by the royal family. Overnight stay in Leh.
Meals : Breakfast, Dinner
Day 3:

Today after breakfast drive about 04 - 05 hrs [125 kms] to Nubra – known as valley of followers. After drive about 02 hrs we will reach – The world`s highest motor able road called Khardongla high about 18,380 feet’s above sea level. From the top we can see the most beautiful view of Indus valley & its snow covered peaks towering the sky and other side of the pass if weather remain clear we can see Karakorum mountain range and peaks too. We descend down to beautiful valley & transfer to the Accommodation. have a rest till evening ,before sun set we will take you for a short drive to Hunder sand dunes to visit & ride double humped bacterium camel, later back to accommodation for overnight stay. If time permits we will have a village walk to see local people & its culture.
Overnight at Nubra.
Meals : Breakfast, Dinner
Day 4:

Morning after breakfast we will visit the most picturesque Disket monastery on the hill top. Later continue drive to other side of Nubra valley – was the main part of silk route. We will continue our drive back to Leh via Khardongla. Reach Leh & transfer to Hotel. Overnight in Leh.
Meals : Breakfast, Dinner
Day 5:

After an early breakfast we leave for Pangong Lake en route crossing Changla pass 17,570fts. Pangong Lake, situated at 13,930 feet (4,267 m). It will take around 5 hours to reach their .A long narrow basin of inland drainage, hardly six to seven kilometer at its widest point and over 125 km long; it is bisected by the international border between India and China. A few years back the government decided to open it to tourists though the lake and its surrounding is under army surveillance. Enjoy the landscape in the back drop of the Lake. One rarely feels so close to nature and environment and the scenery is unforgettable. Overnight stay in Leh.
Meals : Breakfast, Dinner
Day 6:

After breakfast it’s time to check out.Transfer to the airport for your onward flight or back home.
Meals : Breakfast


Price per person in INR:-