Our experts will reply you very soon.

* Mentioned prices may vary depending upon date of travel, hotel availability, surge pricing and seasonal rush.

2 Nights in Delhi with breakfast
1 Night in Agra with breakfast
2 Nights in Jaipur with breakfast
All transfers & local sightseeing by private AC vehicleSpecial Offer
1st 50 people get BELLA TOURS bagAirfare & Taxes
Any increase in Govt. taxes, Fuel price and any applicability of new taxes from the govt.
Any up gradation in hotel room category
Any meals other than specified above
Any sightseeing other than mentioned above
Any Entrance fees or Fees for video or camera permit
Any item of personal nature like tips, laundry, telephone calls etc
Service tax will be applicable on total invoice19-0731-12 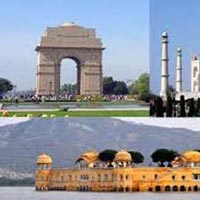 Arrive at Delhi. You will be met on arrival at Delhi Airport / Railway Station and escorted to the hotel. Delhi, the capital city of India lying along the River Yamuna, Seven cities have existed here since the 10th century, ruled over by a succession of Rajputs, Turks, Afghans, Mughals and the British. Delhi is two cities in one; the Old Delhi of the Mughals, created by Shah Jahan after moving his Capital from Agra in 1638 AD is still a medieval district of narrow lanes, forts, mosques and bazaars. The second, New Delhi, built by the British in 1911-1931 and characterized by Sir Edwin Lutyens' architecture, is a spacious and well-designed metropolis of broad avenues, grand imperial buildings and landscaped gardens. New Delhi is a green city with its tree lined avenues, parks and natural forest and one of the City's hidden delights is the picturesque Lodi Gardens set around Mughal tombs and it is home to a number of museums including the national Museum, the Museum of Modern art, the Museum of Natural History and the creative Arts and Crafts Museum where artisans can be seen at work. Overnight stay in Delhi.
Day 2:

Enjoy your breakfast, this morning at the hotel, and proceed to visit drive through South Delhi to visit Qutub Minar, which is a World Heritage site and one of the most historically monument in Delhi. Drive past the Bhai Temple, a serene marble structure of near perfect proportions. Later, visit one of the most inspirational monuments of Delhi's past the Humayun's Tomb. Drive onto Rajpath, a two mile long avenue originally the focal point of British India and now used for parades; lined with ornamental canals the views in both directions are imposing. Drive past India Gate, built to commemorate the Indian and British soldiers who died in World War I, Parliament House and Rashtrapati Bhawan. Standing at the crest of Raisina Hill, Lutyen's 20th Century architectural masterpiece was built for the viceroy during British rule and is now the President's residence. Visit the Birla Mandir as it is popularly known which enshrines Lord Vishnu, situated at the heart of the city. Afterwards in Old Delhi previously known as Shahjahanabad, take a cycle rickshaw through the chaotic, noisy and bustling markets of Chandni Chowk, where trading continues in the maze of shops as it has done over the Centuries. Overnight stay in Delhi.
Day 3:

Enjoy your breakfast this morning at the hotel, check out and proceed and drive to Agra. Agra was the capital of the Mughals during the 16th and 17th centuries. The emperors Akbar, Jahangir and Shah Jahan governed their vast empires from here and as prolific builders; artisans from Persia, Central Asia and other parts of India were attracted by their patronage. The resulting luxurious palaces, tombs, forts and gardens dot the picturesque reverie region along the Yamuna River; three of which, the Taj Mahal, Agra Fort and Itmad ud Daula (baby Taj).
Check in at hotel and later proceed for your sightseeing tour which starts from Agra fort, situated on the west bank of the Yamuna River, this imposing red sandstone Fort was started in 1565 by Akbar. Wander through the lavishly decorated halls, courtyards and galleries discovering hidden pavilions and alcoves while getting a glimpse of the Taj Mahal at a distance. Later visit the Taj Mahal, the world's greatest monument to love and devotion. Built by the emperor Shah Jahan for his favorite wife Mumtaz, its perfect proportions and exquisite craftsmanship took 20,000 workers almost 22 years to complete in 1653 (Closed on Fridays). Overnight stay in Agra.
Day 4:

Enjoy your breakfast this morning at the hotel, check out and proceed and drive to Jaipur en-route visit to Fatehpur Sikri. Fatehpur Sikri: This deserted red sandstone city built by Emperor Akbar in 1571 AD in honor of the famous Sufi saint, Salim Chishti. The Mughal capital for only 14 years until abandoned due to lack of water, the buildings, blending Hindu and Islamic styles of architecture.
After sightseeing of Fatehpur Sikri drive to Jaipur; arrive Jaipur and transfer to hotel. Jaipur widely known as 'Pink City’. Jaipur is surrounded by hills on three sides, crowned by formidable forts and majestic palaces, mansions and gardens. Jaipur is the only city in the world, which is sub-divided in to nine rectangular sectors symbolizing nine divisions of universe. Jaipur is the first planned city designed in accordance with 'Shilpa Shastra'- epochal treatise of Hindu architecture. Overnight stay in Jaipur.
Day 5:

Enjoy your breakfast at the hotel; later proceed for the excursion to Amber Fort, here you will enjoy the Elephant Ride to reach atop of the palace. (Subject to Availability and optional)This journey on embellished elephants is bound to enrich your memories with the Royal lifestyle of the Maharajas and leave you with a truly unforgettable experience. (Subject to availability Inside the Fort visit the Hall of Victory or Jag Mandir - is the famed Sheesh Mahal- a room with all the four walls and ceiling completely embedded with glittering mirror pieces, which were specially imported from Belgium during that period. Continue your journey: with the city tour of Jaipur- visiting Maharaja's City Palace, the former Royal residence, part of it converted into a museum. A small portion is still used by the Royal family of Jaipur. One of the major attractions in the museum is the portion known as Armoury Museum, housing an impressive array of weaponry-pistols, blunderbusses, flintlocks, swords, rifles and daggers. Later visit the Jantar Mantar, which is the largest stone and marble crafted observatory in the world, having 17 large instruments, many of them still in working condition. During the tour you will also have a brief photography stop at Hawa Mahal - the Palace of Winds. Overnight stay in Jaipur.
Day 6:

After breakfast it’s time to check out.Transfer to the airport for your onward flight or back home.


Price per person in INR:-